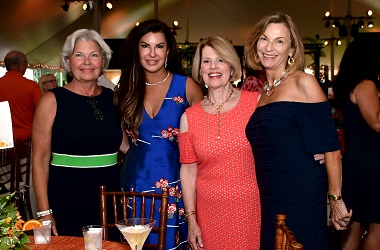 The annual gala is a major source of support for Saratoga Community Health Center, which provides primary care, dental, behavioral health, and addiction medicine services to the community, regardless of a patient’s ability to pay.

The gala’s live auction opened with a tribute to Marylou Whitney by Angelo Calbone, president and CEO of Saratoga Hospital. “For more than thirty years—nearly every year since the inception of this special summer celebration—Marylou’s charm and generosity, her sense of fun, caring, and compassion have brightened these evenings. One way or another, we have all been touched by Marylou.”

Mrs. Whitney and her husband, John Hendrickson, have long served as the event’s honorary chairs. Calbone added that each table’s centerpiece included Mrs. Whitney’s signature pink rose to remind all in attendance how one person—“One special lady,” he said—can help transform an entire community for the better.

In a generous gesture of gratitude on behalf of his beloved wife, Hendrickson placed the winning bid of $100,000 on the Hospital’s lawn jockey—an annual live auction tradition—in honor of Rachid Daoui, MD, chief of Saratoga Hospital Medical Group – Nephrology, and his skilled, compassionate care.

Following the tribute, Meredith Woolford, executive director of Saratoga Hospital Foundation, thanked the event’s sponsors, auction donors, committee, volunteers, and guests. “Saratoga Community Health Center, the reason we are here tonight, has brought life-changing care and hope to our neighbors who need it most,” said Woolford. Summarizing the often spoken words of Renée Rodriguez, MD, medical director of the health center, she continued, “Our patients did not choose their circumstances; almost all just need a little help on their journey to a better life. Thank you for being here tonight so that, together, we can help them on their way to that goal.”

The event, a much-anticipated highlight of the Saratoga summer season, brought to life a Tuscan countryside with summer-inspired décor and authentic Italian cuisine. Guests bid on more than 160 unique live and silent auction items made possible by the all-volunteer Gala Committee and the generosity of community businesses and individuals.

Proceeds from the Hospital’s Gala have supported Saratoga Community Health Center since 2011. The health center, which opened in 2013, is located at 24 Hamilton Street. For more information, visit saratogacommunityhealthcenter.org.

PHOTO CAPTION: Pictured from left to right, Marlene Okby, Julie Bonacio, Maureen Lewi, and Linda Toohey celebrate at the Saratoga Hospital 37th Annual Gala on July 31. The event, presented by Julie & Co. Realty, LLC, and Bonacio Construction, Inc., raised a record-breaking $501,310. Proceeds generated by the event in support of the health center received an extra boost thanks to a generous gesture from John Hendrickson, who donated $100,000 on behalf of his late wife, Marylou Whitney, in honor of Dr. Rachid Daoui.