The couple comes to Saratoga Hospital from Freeman Health 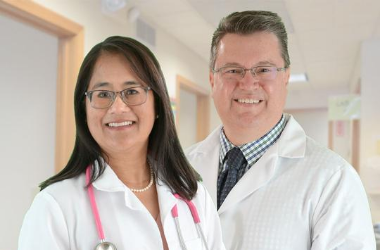 System in Joplin, Missouri. The move is a homecoming of sorts for Keir Neighmond, who was raised in the Capital Region and has family here.

“Saratoga Hospital recognizes that primary care is of primary importance, so we constantly strive to increase access to these vital services,” said Dr. Richard Falivena, vice president and chief medical and physician integration officer at Saratoga Hospital. “In Drs. Abigail and Keir Neighmond, our community gains two physicians who share Saratoga Hospital’s commitment to patient-centered care--and who already have a strong connection to the region. They are a wonderful addition to our primary care team.”

Keir Neighmond completed an internship and residency at St. John’s Mercy Medical Center, now Mercy Hospital St. Louis. He is board certified by the American Board of Family Medicine.

Both physicians are accepting new patients. For an appointment, call 518-399-7723. To learn more, go to www.primarycarescotiaglenville.org.

About Saratoga Hospital: Saratoga Hospital is the Saratoga region’s leading healthcare provider and the only acute-care facility in Saratoga County. The hospital’s multispecialty practice, Saratoga Hospital Medical Group, provides care at more than 20 locations, ensuring easy access to programs and services that can have the greatest impact on individual and community health. Saratoga Hospital has maintained Magnet designation for nursing excellence since 2004. The hospital is an affiliate of the Albany Med Health System, which also includes Albany Med, Columbia Memorial Health and Glens Falls Hospital. The region’s largest locally governed health system, it has 1,520 beds, more than 800 physicians and 125 outpatient locations. For more information: www.saratogahospital.org or www.facebook.com/SaratogaHospital.